I’ve been working on a tool for use at my job. It’s written in WPF and using all my favorite libraries like ReactiveUI, Reactive Extensions and Json.NET.

Using all these external libraries has landed me with a lot of DLLs that I need to include in the folder where my WPF application runs. This isn’t really a viable solution in my case, as I want the tool to be portable. It’s also not an alternative to create some sort of installer; it’s not certain me or any other user have proper privileges to install software were the tool might be used.

After searching around the web for a little while I found the perfect solution, written up by Daniel Chambers. Using his technique worked wonders. This is a technique credited to Jeffrey Richter. It basically adds the referenced assemblies (DLLs) to the exe created by Visual Studio, and adds a handler to help the application find them.

This stopped working, however. For some bizarre reason, it stopped including one of the assemblies and I couldn’t find a way to fix it. After a lot of debugging ang googling I suddenly stumbled upon a simpler solution: Fody Costura.

Costura is a plugin for Fody and both can easily be downloaded from NuGet. Costura fixes this automatically for you. No setup needed!

Nothing lasts forever, and I did of course come across more troubles only a little farther down the road: Suddenly I was getting launch crashes when testing the exe after copying it to a different machine. I was lucky enough to find the solution after only some minor google-fu:

It turns out that Fody Costura only manages to include assemblies in the top folder of the build output. This is usually the bin/debug or bin/release folders of your project folder. SQLitePCL.raw apparently puts the architecture specific assemblies (x86/x64) in seperate sub folders of the output folder. This makes them invisible to Costura.

The solution, however, is simple: 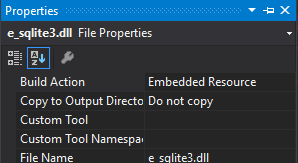 …then tell Costura to add the assemblies in the FodyWeavers.xml file:

Then there were much rejoice.

In summary: I’d recommend Fody Costura for bundling assemblies in your exe file. It’s the simplest solution and it’s been thoroughly tested.